Bulgaria is the poorest country in the European Union, as well as the country with the most quickly diminishing population in the world. These data have not been written by nationalists; they have been taken from the official statistics of EU and UN.

Even if only this catastrophic reality were the only thing that poisons the lives of the Bulgarians, the Government should resign immediately, without being urged to do this! Everyone who has ever participated in such a government should NEVER MORE deal with politics! Not because anybody would prohibit them to do such a thing. No! Such a decision should result from personal shame and repentance.
But, sorry, we have diverted our attention to irrelevant reasoning. To be ashamed is intrinsic to people with conscience and dignity, not to knaves, traitors and criminals such as those who rule us today!

The criminals’ friend Boyko Borisov and his servants in the Government are not the only ones who are guilty of the catastrophe endangering Bulgaria.
GUILTY ARE ALL THE GOVERNMENTS, NOT ONLY THOSE WHO GOVERNED FROM 1989 TO THIS DAY. The utter defeat of the Bulgarian statesmanship and the destruction of the Bulgarian people began as early as after 9 September 1944, when illiterate guerilla fighters and their supplying concealers robbed and destroyed the flower of the Bulgarian nation.
After November 1989, this pogrom continued with even greater fierceness also by the so-called democratic opposition of stupidity-based leadership inspired by its foreign instructors.

This is how we have come to the present day, when our people are dying and the days of Bulgaria as a state are counted! YES, WE, THE BULGARIAN NATIONALISTS ARE AGAINST BOYKO BORISOV’S GOVERNMENT, AND WE ARE ALSO AGAINST ALL THOSE WHO ARE STRIVING FOR OCCUPYING ITS PLACE… BECAUSE THEY ALL HAVE SLITHERED OUT OF ONE AND THE SAME PLACE!
We want to change the system, not to substitute new criminals for the previous ones!

Changing the system means to us a change in the rules of management:

- Prohibition of all parties

- Prohibition of all NGO’s funded from abroad

- Judicial investigation of all politicians, and imprisonment for those who have been proved to be corrupted and have deprived Bulgaria and its people

- A new National Assembly without parties, but with representatives elected from all the estates of our society

- Right of electors to deselect their representatives

- Electivity of the Chief Public Prosecutor, and of police inspectors according to settlements by local residents

- Changes in the Weapons, Munitions, and Explosives Act, which are to give the right to every Bulgarian citizen who is psychically healthy and has never committed a crime to possess a personal piece of fire arms for defense 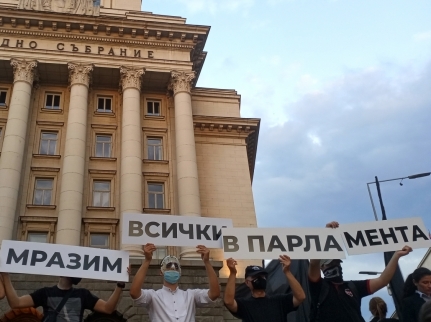