The crossed hammer and sword are a symbol used by all divisions of our community. Graphically, it depicts our struggle for a NATIONAL POWERFUL AND SOCIALLY FAIR  state of the Bulgarians.

Both symbols, like all the others, are black, because in heraldry, in addition to pain and prolonged sadness, black is also the color of hope and prudence. It is a sign of birth, of awakening, of an instinct that can be directed to a lofty goal.

By the combination of the hammer and the sword we express the understanding of the union of the "right" with the "left", of labor with defense, of the national with the social.

The field behind them is white, because this is the color of light, purity and hope that only koubratism can bring to Bulgaria. 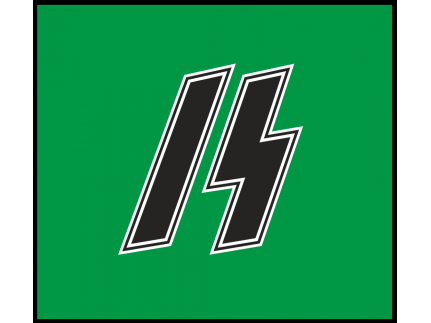 The sign is a stylized image of the number  14, depicted with a slope, which symbolizes aspiration and energy.

Like all other symbols, this one is black - the color of hope, of prudence, of nascent power.

14 is placed on a green base because it is the color of balance and serenity. In heraldry it is also a symbol of honor and nobility.

unruledThe wolf is the second personal emblem of KOUBRAT'S YOUTH.

The wolf in the proto-Bulgarian religion is a totem animal, which is worshiped and awe-inspiring because of its exceptional strength, endurance and bloodthirstiness.
The name of the wolf is present in Bulgarian names such as Vulchan (voivode), Vulko, Vulyo and Kort - the real name of Khan Kobrat, according to the Name Book of the Bulgarian Khans.

In Bulgarian folklore the wolf cult is strongly represented. An example of this is the Wolf feasts in February and November, when a kind of ritual is performed to protect against wolves, while paying homage to them. The skull of the wolf had an occult meaning and application: it was placed next to the beds of mothers, as well as to the cradles to give birth to healthy and strong children.

From time immemorial, the wolf symbolizes the perfect warrior, the art of war and physical strength. Only Christianity defines the wolf as a symbol of the devil and heretics.

The wolf is independent, unruled and inspiring fear and respect. It is believed that the wolf is the enemy of vampires and karakonjuli, who chase and tear.
The wolf is the embodiment of military virtues, a living example of courage, camaraderie and self-sacrifice.
The wolf pack is like a fighting squad - there is order and hierarchy in it; life in it follows strict rules. At the head of the pack is an alpha male who wins the leader’s right in a fair fight. In the same way, the other wolves assert their place in the hierarchy of the pack.

In nature, the wolf is also an example of racial selection - both among the victims and within his own species. He is a noble predator that kills only weak and sick animals, but leaves healthy ones to reproduce, thus strengthening the gene pool of their populations. That is why they call him nature nurse. Where there are no wolves, herbivores become susceptible to disease and degeneration.

But the wolf does not tolerate the weak in its own way. When the she- wolf notices that one of the little ones is growing weak, she shows it to the others and they tear their brother apart. This is eugenics - the act of purifying the race from the unfit. But the wolf does not do this alone, but assigns it to her children to learn this basic life lesson - "Racial purity is the first and basic law of nature." (Kavkhan Bolg).
The she-wolf is an example of a caring but strict mother, raising healthy and strong generations.

The wolf is an inseparable companion of the people in the fierce battle for survival. Since ancient times our ancestors have observed the wolf while learning from his wisdom. They have seen in the wolf a metaphysical likeness of themselves, of their social order and virtues.