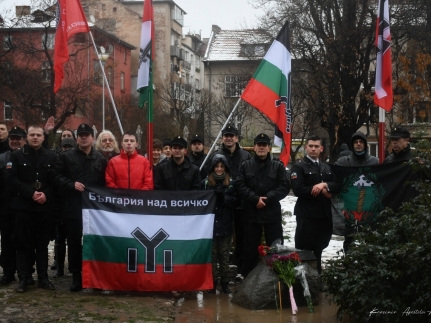 Seventy-seven years ago, on a day cold and sullen like today, the Anglo-American aviation delivered its ordinal, merciless blow on the capital city of the Tsardom of Bulgaria.
The bombardment was aimed at only one target – the civil population of Sofia.

The killed, wounded, and lost with no trace were thousands but despite the devastation of the city the air raid failed to break the Bulgarian spirit.
The enemy forces at that time again exceeded those of the defenders – the Bulgarian airmen of 2/6 and 3/6 fighter-plane wings and the German airmen of I./JG Eismeer, commanded by Captain Gerhardt Wengel.
In the raging, bitter battle, the English and Americans lost several bomber-planes and other ones were deflected from the target, which saved the lives of a large number of innocent civilians.

Unfortunately, on that same day, in the sky above the town of Radomir, in an unequal fight against the enemy, Hauptmann (Captain) Wengel perished too. According to memories of contemporaries, the German airman, shortly before his plane’s shooting-down, was fighting an air battle against several enemy planes until the moment when he was shot by an enemy bullet in the head and his plane crashed into the ground.
We, the generation not aware of the terror of war, remember the heroes who were perishing so that we would exist. This is why this year, too, KOUBRAT’S YOUNG FOLLOWERS, BULGARIAN NATIONAL UNION and BUNDLE NATIONAL AMALGAMATION (recall Khan Koubrat’s bundle of sticks; each of the smallest units of our union is called stick and a number of several such sticks is called bundle) prepared to honour the memory of Captain Gerhardt Wengel. For preparing the commemoration, it was necessary to inform the bundles’ leaders and all our sympathizers, as well as to build up two piles next to the memorial slate to Captain Wengel, in Boukata (the Beech-Tree/ Garden.
The commandant of the enterprise was Boyan Rassate, and I was determined to be the assistant-commandant.

The preparations for the event began just a week earlier. People were being notified while the materials were being purchased for working-out the piles.
Our associate Koubratist Brother Yordan Manasiev worked them out timely, ‘Cadet’ (Junior Officer) Stoyan Manasiev painted them, and, one day before the commemoration, I, together with Boyan Rassate and an adherent of ours, Grigor Karastoyanov, excavated two holes, stirred the concrete, and placed the piles.

During the whole day when we were placing the piles, the weather was awful. It was raining and everything was so soaked that while working we were wading to the ankles in mud. Despite this, we managed to fix them into the concrete and at the end of the day, after I had stirred J concrete for the first time, my mates and myself were very glad of what we had done.

The commemoration began on the following day, at 13:00, with a welcoming speech by Koubratist Brother Irnik, who gave the floor to one of the attendees to tell us the story of his great-grandfather, Dr Popov – a physician at Aleksandrovska (Aleksandur’s) Hospital, who perished in that same bombardment after refusing to abandon his patients and hide in the bomb shelter.

After him, Koubratist Sister Vatah pointed out that the commemoration of Gerhardt Wengel should grow into a day for honouring our perished allies in the two world wars – the German soldiers and officers. The floor was also taken by Koubratist Brother Aleksandur Souev: ‘It is shameful that in present-day Germany the heroes who deserve respect are not respected!’ he pointed out.
The closing speech was delivered by the Leader of the Bulgarian National Union, Koubratist Brother Boyan Rassate. His words were worthy of the memory of the perished heroes.

We thank all those who, despite the bad weather, honoured with their presence the memory of Captain Gerhardt Wengel, who had perished heroically in defense of the Bulgarian sky!

Speech by the leader of the Bulgarian National Union (BNU), Boyan Rassate.