Khan Koubrat’s Sword and Ring Have Come to Sofia

The sword and ring of Khan Koubrat, the ruler of Old Great Bulgaria, are going to be exposed from 24 May to 30 June 2022 in the National Gallery of Arts, in Sofia.

These unique artefacts are only a proportion of the most significant Bulgarian treasure found outside the present-day territory of Bulgaria.
The treasure was found in 1912 near the village of Malaya Pereshchepina, Ukraine, and it consists of about 800 artefacts, among which are 11 gold cups, 16 gold and 19 silver vessels for the way of life, 500-gram and smaller belt buckles, a necklace of emeralds, a rhyton, 7 rings, 230 gold ingots, 70 Byzantine coins, and a number of other ones. Among the latter is a bone comb and a knight chessman. The total weight of the described artefacts of the treasure of today amounts to 25 kg of gold and 50 kg of silver.

We recommend that all Koubratist brothers and sisters, as well as all Bulgarians who are interested, separate some of their time to see these unique relics – witnesses and contemporaries of our old glory and grandeur.

We, who visited the exposition, though we watched from some distance these artefacts, were really excited: the sword of one of our greatest forebears, as well as his ring, were only a few centimetres away from us. Watching these priceless artefacts, we inadvertently were mentally carried away centuries back in time.
The founder of Old Great Bulgaria, the father of Asparouh, Kouber, Kotrag, Bayan and Altsek had been touching the artefacts behind the glass, and now, hundreds of years later, we were standing before them.

A thing like this cannot be seen every day.

In addition to the artefacts from the Pereshchepinan treasure which had been delivered to us by the Hermitage, in Petersburg, we could also see a unique picture of Prince Alexander I von Battenberg, which had been purchased at an auction abroad.

With this did the day dedicated to history and culture end. 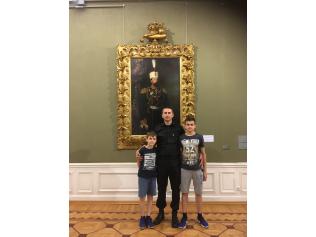